Loss of the autochthonous Alpine pigs and recent discoveries

Once, each region had its own locally adapted breeds. These belonged (as with their building style) to their cultural heritage. Cross-breeding and performance driven breeding has displaced these breeds in the last 80-90 years. Unlike sheep, where many traditional breeds were conserved, the loss in the pigs was dramatic. Today there are almost only the standard, pink pigs. This has also led to a radical change to the Alpine pasturing of pigs

Due to their physique (short-legged, long and heavy body) the modern performance breeds are not suitable for grazing mountain pastures. The pink animals with their lack of skin pigmentation cannot tolerate the strong UV light of the Alps. They very quickly develop sunburn, which can be dangerous. They must be protected from weather changes, large temperature differences and rapid climate change in the harsh alpine climate. The modern animals often taken along to the cow-alps to consume whey from cheese-making, but they are mostly kept in sheds and fed with additional cereals. They do not have much in common with the original, extensive grazing pigs. 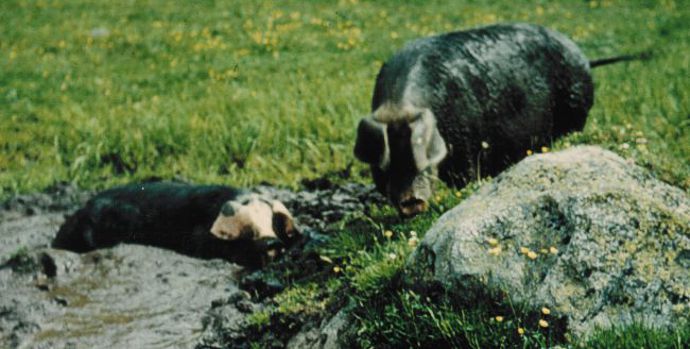 Grisons or Valtellina pigs on the Andossi-Alps, on the Spluga passroad (Photo Vinciguerra, ca. 1980)

At the end of May 2013, Dr. Alessio Zanon from the Veterinary University of Parma and pig expert of the Italian organization for the conservation of endangered livestock breeds (RARE), informed SAVE that a group of small, black Valtellina pigs had survived in a Fattoria Didattica (didactic farm), but were unfortunately very endangered. He asked SAVE to make conservation measures (Valtellina pigs are identical to the earlier Grisons pigs in Switzerland). In the knowledge that a breed can be extinct before all the animals are dead, the "network for old Alpine breeds" (now "Pro Patrimonio Montano") spontaneously took over animals and is now building up the breed. Since the Valtellina pigs are the last real Alpine pigs and are clearly differentiated from the larger, also almost extinct pigs in the Po Valley (Mora Romagnola, Nero di Parma), at least the ecotype of this mountain pig must be conserved. In this ecotype other relics of the pigs of the southern Alpine region will be merged. Meanwhile, more individual animals and groups have been found (e.g. from Samolaco pigs).

Meanwhile last specimen of the old varieties could be found: In Val Chiavenna a small relict group of the pied Samolaco pigs and in a remote side-valley of South Tyrol also some last spotted Southe Tyrol pigs. The search tours will go on! 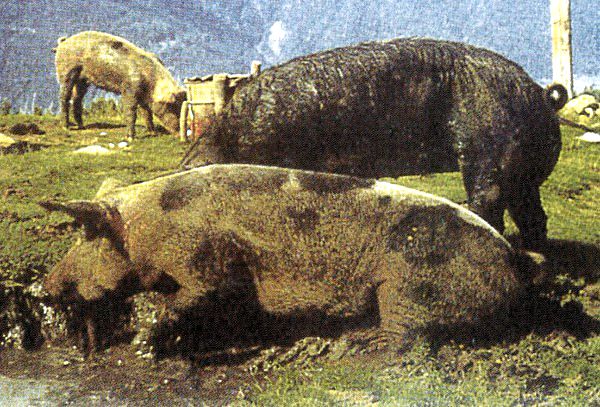 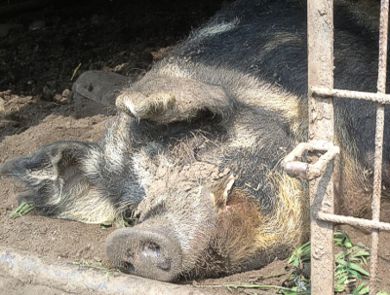