In an alp season from mostly about 90 to 100 days, the pigs took advantage of the large diversity of mountain grasses and herbs. The content-rich, aromatic plants (eg mountain plantain, alpine meadow-grass, thyme, yarrow etc.) gave the meat of the pig a unique taste that would be label-worthy today. The inclusion of green fodder on the alp enriched the meat of the pigs with the valuable omega n3 fatty acids, which are missing in modern pork. Due to the constant movement of the animals and the slower growth by extensive farming, the meat was also more compact and the fat as a flavour-carrier was better distributed in the body (marbling). The old breeds were also characterized by great robustness, were used to life in the open field and needed therefore hardly needed great care (and no drugs).

The pigs were kept in places that were nutritionally worthless to the cows where they grazed the plants on the over-fertilized soils or caused by their digging a partial improvement of the pasture vegetation. Fields overrun with docks were often used for the feeding of the mountain pig (which are fought with chemicals today) and the pigs were allowed to freely dig in the ground (roots, mice, beetle-grubs, ...). Thus, the weeds were counteracted and the floor that was compacted by cattle hooves was loosened. 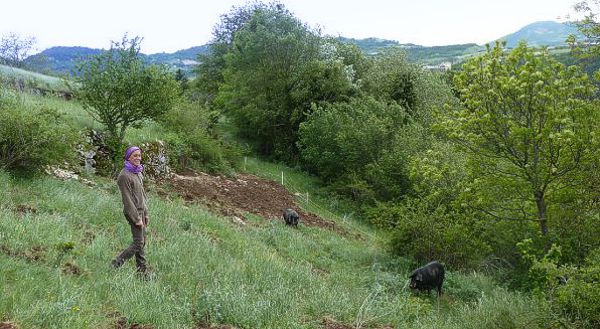 The traditional Alpine pigs are a living heritage of the Alps. They were part of the former indigenous agricultural mountain-agriculture. Some breeds were used as a fat supplier (an important energy source for the hard-working mountain people, lard reserves for times of emergency, ...), other were particularly kept as meat suppliers and selected accordingly. This technically and genetically caused differences and led to a really widely-scattered biodiversity in pigs herds of the valleys in the Alps. Due to the small spatial structure of the former economic areas this high biodiversity has been developed over many generations and also conserved. The respective inhabitants of the Alps had their pig breed, which could be best kept with the farm's own feed.

Today the animals are mainly fed with whey and energy- and protein-rich cereals and soy feed mixtures similar to the fattening farms in the valley. This causes a unilateral, protein-rich feeding, can be regarded as inappropriate for the species and, also for humans, as nutritionally questionable. Inside, the animals cannot live out their species-specific needs (movement, rooting, ..). 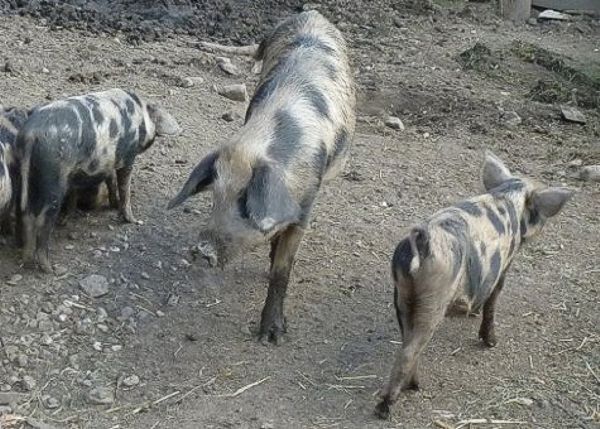 Long legs and a short body make the Alpine pigs appropriate for the mountains!

Prospects for a partial reversal

The last Alpine pig breeds exist as part of the Alps unique agrobiodiversity, they are a genetic treasure that must be preserved for posterity. At the European level a goal is to increase the contribution of agriculture to biodiversity conservation (objective 3 of the Biodiversity Strategy 2020) of the Europe 2020 strategy.

=> If we care deeply, maybe we can support a relic stock and conserve autochthonous Alpine pigs for the future.