The stock has now risen to nearly 180 recorded breeding animals in a total of 30 breeding groups in 4 countries. Most animals are kept in color-mixed groups, but there are also pure white and pure black groups, jokingly called "snow-Tyrolean" or "chimney-Tyrolean". The appearance of the new Tyrolean was - apart from the color - from the beginning uniform, so that already a provisional breed standard could be formulated

The standard is now published on this website under the navigation line "Breeding" in German, Italian and English. The chicken population "colonizes" again large areas of the original distribution. In the South Tyrol-Trentino live 7 breeding groups, in North Tyrol 3, in Salzburg, Vorarlberg and in the German border region one group each, in Eastern Switzerland 14 and in Central Switzerland 3 breeding groups. 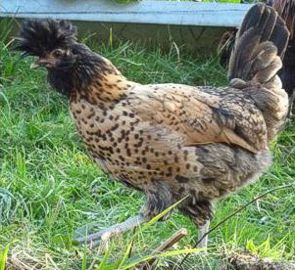